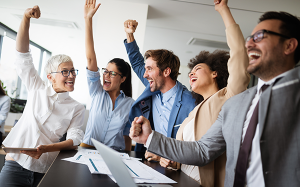 The Justice Team has many reasons to celebrate with recent implementations and upcoming new projects. Highlights include the “Go-Live” for statewide implementations (New Mexico, Iowa, and Missouri) and other implementations for new clients that will soon be underway.

The most recent cause to cheer is the State of New Mexico’s “Go-Live” last week with Clearview Jury and Clearview Justice Portal! The State of New Mexico was supported by the entire Avenu Clearview Jury and Technical Support Team who worked diligently to meet deadlines for Part 1 of the Go-Live.  Final touches were performed by Kevin Hollis who completed the client’s final production data migration, and Ann Hegglin who provided in-depth support to the client for their end-user training and final configuration refinements.

Mike Poth, SVP of Delivery & Customer Support shared the following congratulatory note with the team. “I would like to thank and congratulate each of you individually and collectively as a team for the great work on our recent GO-Live of Clearview Jury for the State of New Mexico!  Taking a site through an implementation and taking them live is never an easy task but it sounds like you all made it look easy. The work all of you are doing is having a positive impact for customers and the citizens they serve!”

Another exciting accomplishment by the Justice Team is the deployment of Clearview Justice Portal (CJP) Qualification into Production for two other Statewide client environments – the State of Iowa and the State of Missouri! The State of Iowa was the first client to implement the CJP Qualification Plug-in, and successfully transitioned to production in October 2021. The State of Missouri Office of State Court Administration (OSCA) was the second (and recent) statewide deployment of CJP Qualification, and more importantly it is also our first Avenu-hosted CJP implementation! We would like to give a special thanks to Todd Hensley, Andy Chang, Ann Hegglin, Danny Womack, Troy Hickman, and Mark Terrill.

The Justice Team is certainly not resting on their laurels as they prepare to start on Miami-Dade County, FL, which is a new CJP Qualification Migration Project. This project has kicked-off with a discussion of the technical / system requirements for CJP, so that the client can establish their Test Environment in preparation for Application Installation and configuration.

Congratulations to the entire Justice Team for the incredible work you are doing and for serving our clients! Way to go!!!