Avenu Welcomes Honolulu County, HI As One of Our Newest Customers 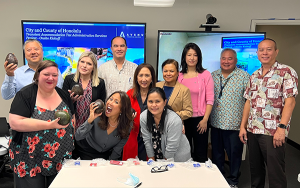 Avenu welcomes Hawaii’s Honolulu County, officially known as the City and County of Honolulu, as one of our newest customers. We are partnering with Honolulu to provide Tax Administration for Transient Occupancy Tax (TOT), Motel Tax and Short-Term Rentals (STRs) and assist with roughly 70,000 transactions per year for the jurisdiction. We will also work with the Planning/Code Enforcement Department to provide monitoring and identification of non-compliant STRs.

The kick-off meeting was held in Honolulu on November 14th with all stakeholders present as well as Avenu’s Rachelle Arizmendi, Christy Cato, Marina Reed and Steve Park. While at the meeting, everyone was able to have some fun and enjoy the “giant avocados.”

Congratulations to the entire team and the many who played a role in winning this contract.